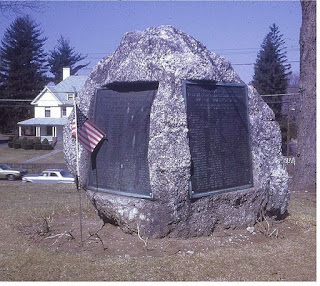 Charlie Crowell writes: “This is Watertown’s WWI Memorial on the triangular green next to the old Town Hall. This photo is from about 1969. This boulder was originally located off Old Baird Road which runs from Hamiltion Avenue across to Woodbury Road. Much of the road is abandoned and impassable today.

Before being used as a monument, this stone was known as “balancing rock.” At its original site, it sat on top of a rock outcropping and was so finely balanced that a small child could push it and to would rock back and forth, but it couldn’t be knocked over. The seemingly precariously balanced boulder was left in that position by the last ice age. The process of dragging the rock to its present site was grueling and laborious. It was done using horses.

In the background you can see one of the old Heminway mansions on Main Street, now owned by the Methodist Church."

Tim MacSweeney: A Balanced Boulder (in its original "found" setting) in Native American Ceremonial Stone Landscape terms - a Drum or Signal Stone if it made a sound when set into motion, like many found throughout the Northeast. What is your source for this story? I'd like to pass it along to Dr. Hoffman (as part of CT Cluster #3 (the Nonnewaug Cluster): https://www.arcadiapublishing.com/Products/9781634990493

Charlie Crowell (to Tim MacSweeney): Tim, this story was told in the Town Times, sometime in the 50s or maybe even the late 40s. It was also told back when the project was undertaken in the 20s in the Waterbury papers. Sorry but I don’t have the stories readily available.

Charlie Crowell (to Al Conley):  Richard Sperry, owner the land where the boulder originally sat, wanted to keep it as a balancing rock even after it was moved and set up as a monument. He thought engineers could handle the job, but it never happened.

Tim MacSweeney (to Charlie Crowell): An imaginative investigator might wonder if it is set up on a flat stone - or even a piece of the bedrock removed from the original location near Old Baird Road!

In its original location, it would have been and continue to be considered a Sacred Stone by the Paugussett: https://www.facebook.com/The-Golden-Hill-Paugussett-Indian-Reservation-165294113670095/